The Son of Satan 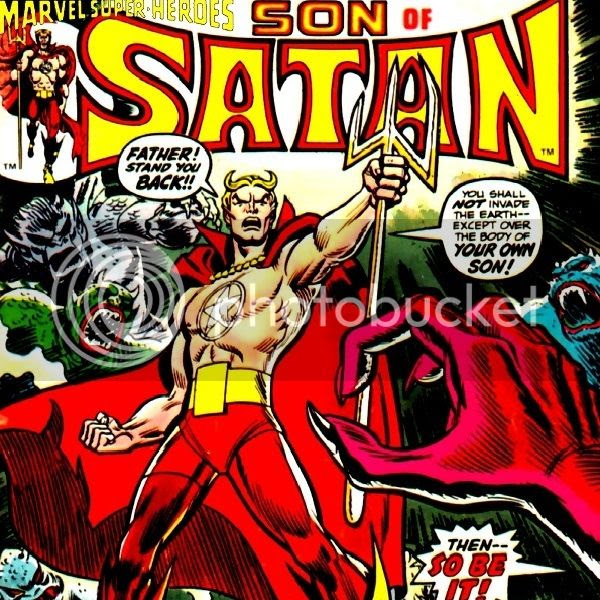 Look for us on iTunes, Stitcher or just Download MP3

Face Front, True Believer! It's Christmas time children, so here comes Satan 'cuz we're a pack of heathens, obviously! Daimon Hellstrom is coming at'cha straight outta 1973 ahead of the Satanic Panic of the early 1980s! The brother of Satana debuted in Ghost Rider #1 before appearing in another 7 issues of that title plus 13 solo appearances in Marvel Spotlight and 8 issues of his first eponymous series! Not only do we discuss the early career of the future Hellstorm, but we also consider Satanism in general, the AMC Preacher series, and compare and contrast with other demonic characters with endless spoilers thrown about! We finally settle in on the ultimate issue of Son of Satan, one of the most sensational inventory stories of all time, with such scintillating art by Russ Heath it required we bother to post a gallery below! Excelsior! 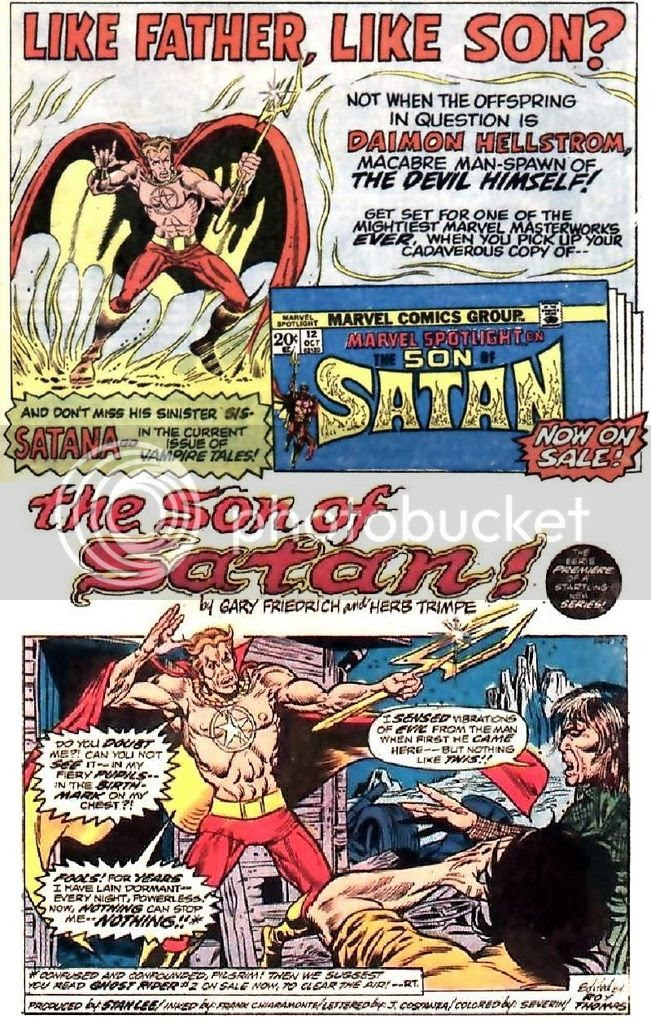 "Early morning! The first rays of dawn are too weak to cut through the heavy fog which enshrouds a tiny cemetery in New England. A hand! It reaches downward through the swirling mists and places a gold cross upon a grave-- A man! He stands by the grave and stares at the weather beaten tombstone-- remembering his mother, and wondering if he will ever face again-- A WOMAN POSSESSED!"

Incredibly dumb, overly long Native American sorcery story arc involving the Satanic sorceress Linda Littletrees repeatedly trying and failing to destroy Ghost Rider following her father and boyfriend also failing to kill Johnny Blaze, but motivated more by his being an entitled peckerwood cocksucker who just had to jump some goddamned ravine in a way that would ruin the Indians chance to get their land back from the government. 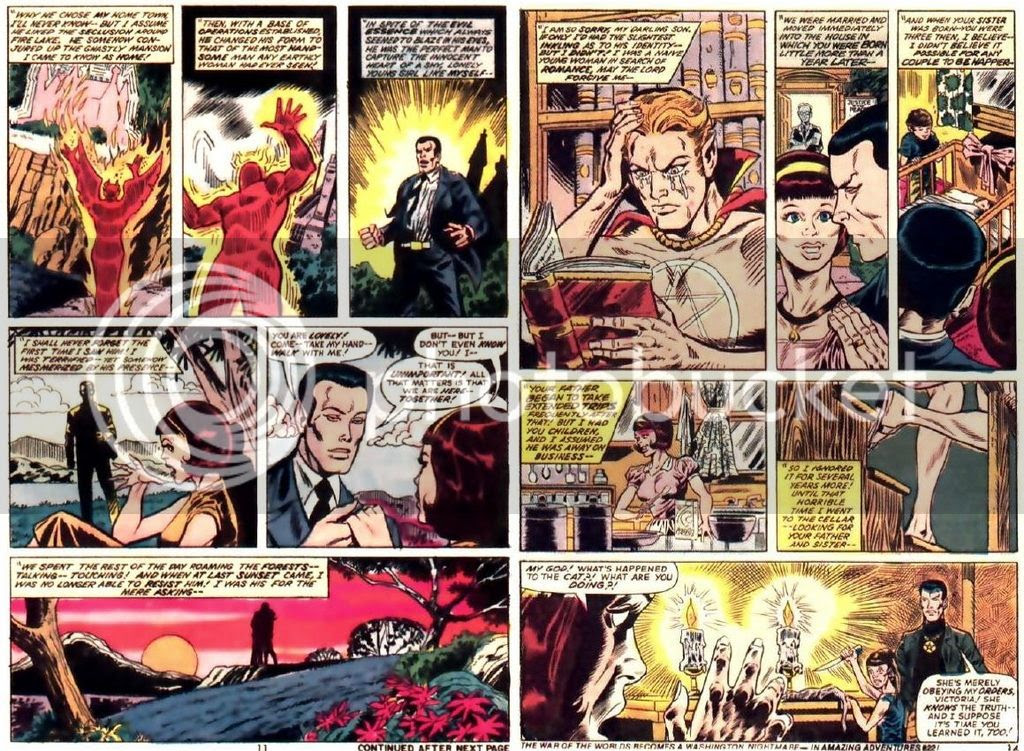 Thinking the problem is demonic possession, boyfriend Sam Silvercloud called renowned exorcist Daimon Hellstrom in Boston from a payphone because his shack didn't have a fucking indoor phone line. Long monologue about spending weeks waiting for a challenge and years in a quagmire of indecision, "But now my future is set! I stand determined to stamp out the heritage of my birth-- and to rid myself forever of the stigma of evil attached to this Mark of Satan birthmark on my chest!" Linda is soon willingly repossessed by the devil before Hellstrom can get his birthmark to Arizona, and the first thing this motherfucker thinks when he arrives is, "A rundown Indian shack! I'm not going to get rich off this assignment!"

Linda the oooo-ooo Witch-Woman returns in a fringed red long sleeve halter top (which I didn't know was a thing) hot pants & go-go boots to battle Ghost Rider. Meanwhile, Daimon Hellstrom can't help until the next day, because he needs to be restrained overnight by papa Snakedance and Sam Silvercloud with a special chain of ankhs before he becomes a madman at moonrise. Daimon even gets down on his knees and prays to make it through, but he's a backslider, who tricks the Indians into releasing him and also out of the deed to their shack, probably. The White Devil is known for that sort of shit, and there's no one more white or more devil than the full blown Son of Satan, with his pointily coifed ginger hair, vampire fangs, and Spock ears and eyebrows. He was bare chested to show off his pentacle birthmark,wearing a red cape and pants with gold bracelets, boots, and forked trident 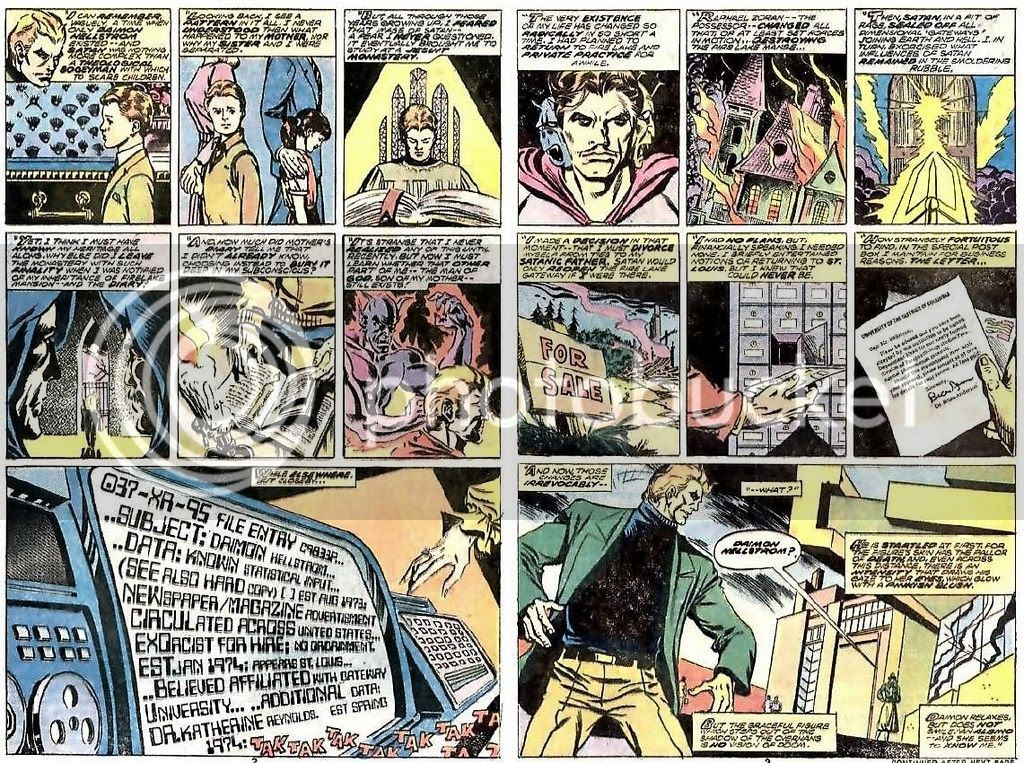 However, we wouldn't actually see this abomination of fashion until the story crossed over into Marvel Spotlight #12, where the Son of Satan officially took over the book in an eponymous story by Gary Friedrich & Herb Trimpe, where he proclaimed "You see, I am a man dominated by two characters! In the daylight hours-- I am the puny religious weakling Daimon Hellstrom, sworn enemy of my father! But by night, my true and rightful heritage takes control-- and I become my father's son! For too long has Hellstrom kept me at bay-- but now all that has ended--" Son of Satan carries The Elemental Trident, made from a metal found only in the fiery pits of hell called netheranium, and was the only thing that could stay the devil himself. Son of Satan demonstrated its power by rending the earth and threatening to cause molten lava to bubble up, as well as calling down a thunderstorm. He could also summon The Demon-Drawn Chariot of Satan, which runs on a pair of reined in fire-breathing, stallion-like creatures with fangs, hooves like a scorpion's stinger, and long tails like a komodo dragon. In the entirely random fashion of a Ghost Rider comic, Son of Satan then gets into a fight with a biker gang that once kidnapped and very strongly implied having raped adopted sister/lover Roxanne Simpson. After shooting fire from his hands that melted a gun, Son of Satan grabbed a lady biker by the hair, jerked her head backwards, and demanded "SPEAK, WOMAN! I CAN SENSE HIS RECENT PRESENCE HERE! WHERE IS SATAN!" The Son of Satan then basically walks into Hell to face his father, so I don't know wht he bothered with the bikers. Plus, in their first confrontation, Son of Satan makes old man digs on his dad, then threatens to collapse the roof of Hell, which allows him to rescue the captive Johnny Blaze and Witch Woman and exit hell. Son of Satan makes a big point about having only saved them to spite his father, because he's both a dick and a pussy, and nobody's buying that sorry excuse. However, he does strand Johnny and Linda in the middle of the Arizona desert just because he could. 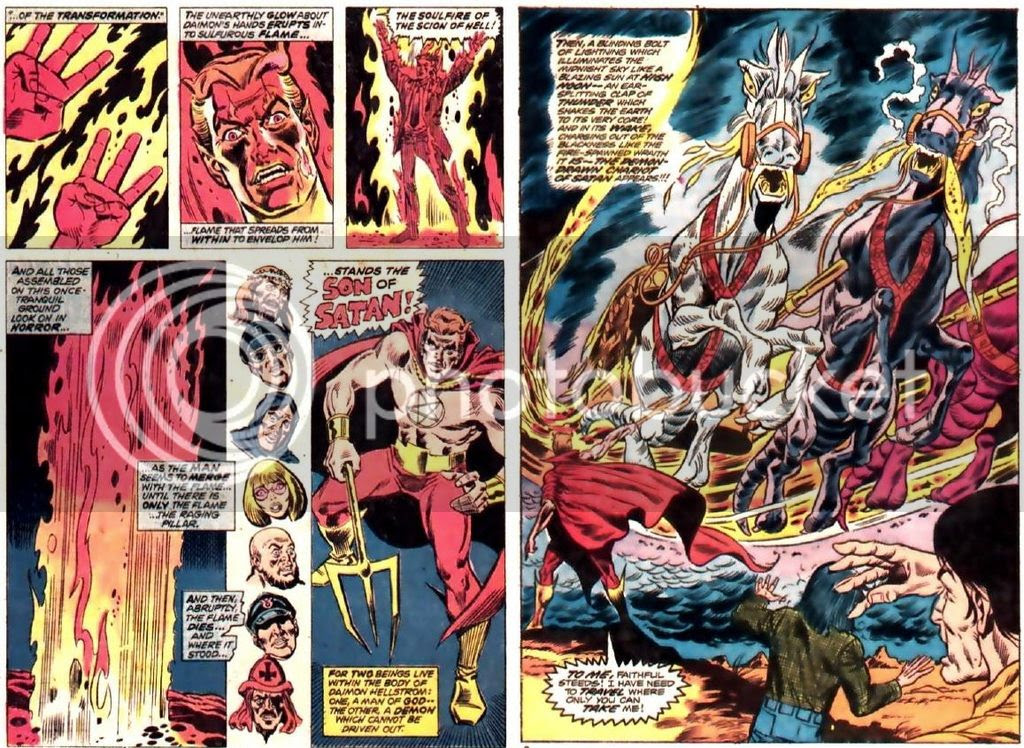 The third issue of Monsters Unleashed magazine had a preview of Son of Satan that explained he was created at an editorial MEETING where Brother Voodoo and Satana, the Devil's Daughter were also conceived. Basically, Marvel had finally overtaken DC in sales, and wanted to solidify their lead by capitalizing on the recent horror boom following the loosening of CCA restrictions, as well as a then-recent popular interest in Satanism. Stan Lee supposedly asked rhetorically, What conflicts are more dynamic than those involving God or the Devil?" Stan had already tested the temperature on a Satanic character with Mephisto in Silver Surfer, and Ghost Rider had done well playing with the infernal, so Stan wanted to try taking on the devil as a central figure. Roy Thomas suggested keeping Satan as the antagonist, with Rosemary's Baby grown up as the protagonist. Stan and Roy sketched out the basic premise, then asked Gary Friedrich to write it. Friedrich suggested launching the character in a crossover between the first three issues of Ghost Rider and and two issues of Marvel Spotlight. Roy knew Hulk artist Herb Trimpe was itching to do a supernatural series, and was supposedly ecstatic over the assignment. 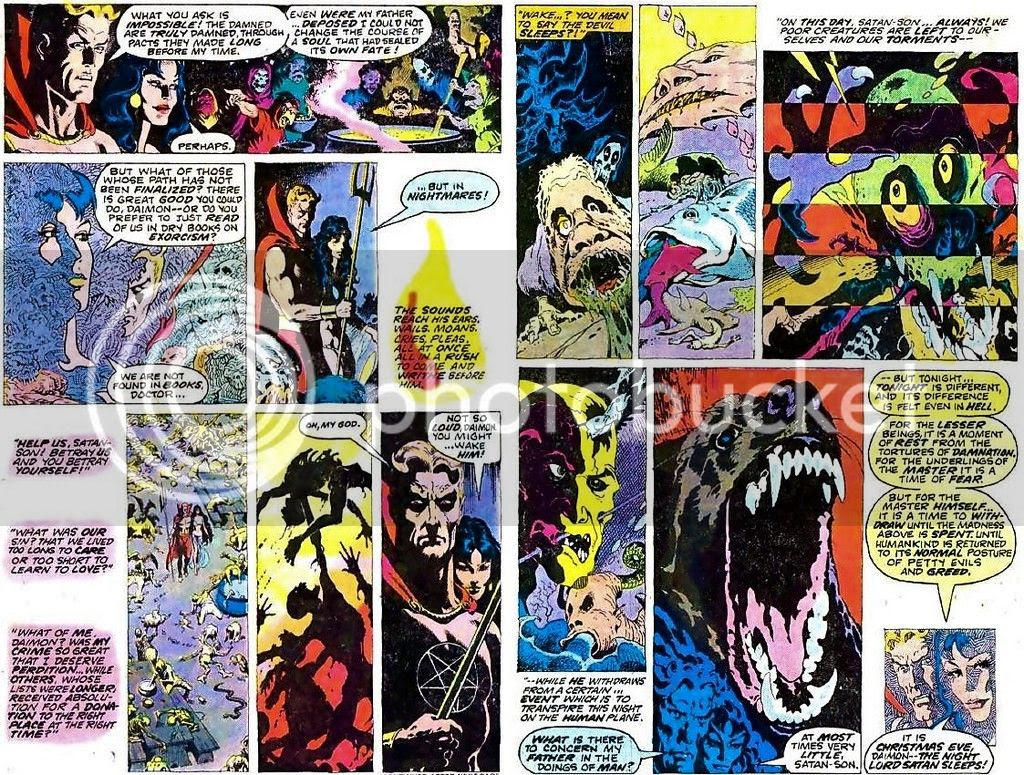 In the May 2001 issue of Comic Book Artist, Thomas said Stan had wanted to do a book called Mark of Satan with the devil as the lead character, but Roy thought that would be going too far. Thomas also realized after the fact that he'd unintentionally swiped the basic concept of Son of Satan from a fan press character created by a friend of his named Biljo White. In a case of parallel thinking, the character design came back looking like White's concept, even though the creators assigned to the book were presumed unfamilar with the fan character.

The next issue of Marvel Spotlight had a nice John Romita Sr. cover that helped connect Son of Satan to Satana, which made sense because they retroactively shared an origin. The devil took an appealing human form, seduced a woman, sired two children, taught his daughter how to be evil, but was less successful with his boy. Victoria caught her husband and daughter performing animal sacrifice in the basement one day, was exposed to the true face of Satan, and spent the rest of her life in an insane asylum. As her last act before a premature death, Victoria gave Daimon the chain of ankhs to help keep his darkness in check. Growing up in an orphanage divorced from his family, the adult Daimon Hellstrom studied for the priest until he found his mother's journal and learned his true heritage. Daimon was soon lured to hell to be tempted to join his father, but rebelled and stole the Elemental Trident before escaping the abyss. 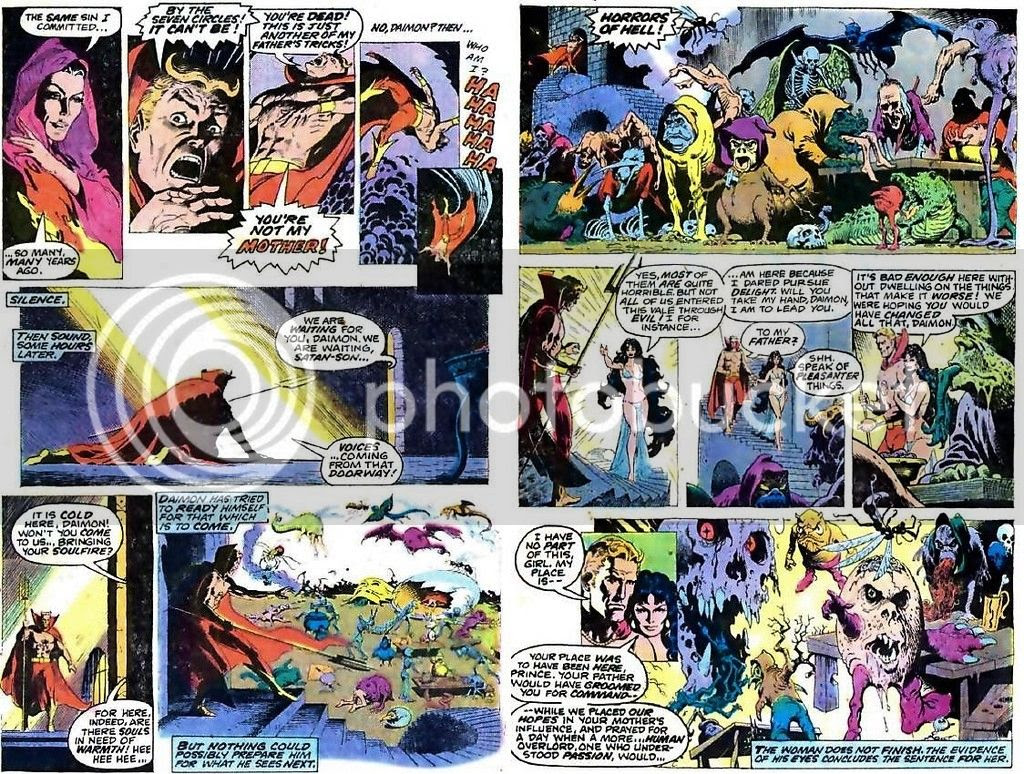 I haven't read the later issues of the Marvel Spotlight run, but from my research it apparently peaked after Steve Gerber took over the writing. He brought in a religious Christian love inerest named Dr. Hatherine Reynolds who struggled with her growing affection for Daimon Hellstrom and his struggles with the Son of Satan. At one point, Son of Satan was willing to let her be killed by a demon, then agreed to bargain with it, then went back on his word to kill the demon while stating it was his prerogative as the child of the Great Deceiver. Next he checked to see if Reynolds was alright before slapping her for putting him in that situation to begin with.

Gerber did a bunch of research into Satanism and the occult which better informed his take on the character. Apparently, the upward pointing pentacle on his chest was Wiccan in origin, so Gerber reversed it to reflect its usage by the Church of Satan. This happened on Daimon's birthday which is also the Satanic holiday Candlemass, and reflected Daimon's newfound ties to the demon Baphomet and a final merging of Daimon's dual natures into one being. Basically, the Son of Satan stopped raging every night, but now Hellstrom spent every moment fighting the impulses of his demonic self. The Son of Satan continued to take on supernatural cases through Marvel Spotlight #24, but Steve Gerber left before the end and Chris Claremont wrapped the feature with a battle between Daimon and his sister Satana that ended with them joining forces against another demon, but not before Daimon nearly murdered Satana and made of her a permanent enemy. Also, it was during the Gerber run that Clea and then Dr. Strange started outsourcing Hellstrom's help in cases involving The Defenders.

Posted by Rolled Spine Podcasts at 10:14 PM No comments: